There I was … after working hard on a big project for 4 months, Friday, 17 December was finally my last day at work before flying home for Christmas.  More importantly, Alesssandro was going to come to Germany as well so we could spend some time with my parents which, given our long distance relationship (Milan-London) we rarely get to do.  The weather forecast for the coming days looked pretty bleak with temperatures at home set to plummet to -8 and lots of fresh snow forecast for London.  At least Friday looked good. Or so I thought until, about midday, when there was a snowstorm and my mum informed me at the same time that Essen had had about 22cm fresh snow overnight.  I became worried and tried phoning my airline.  Clearly, I wasn’t the only person to do so.  It took me hours to get through to anyone.  And when I did, not only was it too late to get onto an earlier flight, that earlier flight had already been cancelled.  When it became clear my flight was cancelled (Alessandro’s flight was already 4 hours delayed at this stage), I frantically tried to change my flight to sometime early on Saturday.  This proved impossible – the call centre was so busy they simply cut you off rather than putting you on hold and the flight cancellation had not made its way through to the online booking centre.  I decided to go to Heathrow to try my luck there.  Again, in vain.  Airport staff had closed all the counters for changing flights because staff couldn’t keep up with all the people.  Eventually my sister managed to get me onto a flight home on Sunday afternoon.  About 1 hour before Alessandro was supposed to fly home again.  So we changed his ticket as well and we will just have to try to come home some other time.  And my travel chaos does not end there – in the end, no shorthaul flights were leaving Heathrow until later that week and I managed to travel home via Eurostar, picking up my sister in Brussels.  I arrived 4 days later than planned and what is normally a 45minute flight turned into a 20h journey and 48h without sleep thanks to Eurostar’s ineptness.  But on to happier things.

That Friday night when I came home, I was really upset.  After working hard for months on end, I had really been looking forward to the weekend.  I hadn’t seen Alessandro in 3 weeks so I was looking forward to spending some time together before we go skiing with his family after Christmas.  Also, my parents have only met him once in the 3 years we have been together (I blame the Milan-London distance plus the fact that my parents live in Germany for that) and they adore him so I was looking forward for all of us to spend some more time together.  Instead, I got home to an empty flat (and an empty fridge!) with all my bags and feeling a bit lost.  I spoke to my mum and she said I should make the best out of the situation, do whatever would make me feel happy.  So I decided to bake.  See, I love to bake, and I would love to learn more techniques, become more adventurous, but I lack the time.  And not in a, if I wasn’t so lazy and I had more time, no, I really don’t have the time.  Yet, here I suddenly was, with plenty of time (until Sunday afternoon!) and I finally tried a new recipe I have been thinking about for the past 4 weeks … after drooling over the pictures of Pioneer Woman’s Cinnamon Rolls for way too long to admit yet not having had the time to wait for dough to rise, I thought today was the day.  My sister had used her recipe before so I knew it worked really well and turned out fluffy and buttery cinnamon rolls time and time again.  However, instead of a cinnamon filling, I wanted to use some of the pureed chestnut I had bought a few weeks ago.

When holidaying in the south of France as a child, we would often eat fresh baguette slathered in Creme de Marrons des Ardeches … a sweet jam-like cream of pureed and sweetened chestnut.  And ever since, I cannot walk past pureed and sweetened chestnuts when I see it in the stores.  To be fair, this doesn’t happen very often in London so when I finally found some cooked and pureed chestnuts in Planet Organic I figured why not try to use these for some Chestnut Rolls.

The recipe is loosely based on the Pioneer Woman’s recipe for cinnamon rolls, but I tweaked the steps slightly and came up with my own recipe for the chestnut filling (if you can get your hands on a jar of chestnut jam, you can omit this step and simply use the jam as is).  And, I’m just gonna say this, this recipe is the best recipe for a yeasty dough I have ever come across.  I have made cinnamon rolls before, with different recipes, and they came out dry and not fluffy at all, and I have made pizza before and the dough has never been this elastic.  So yeah, I have decided that this will be my go-to recipe whenever I need a yeasty dough.  Now I just need to find a way to adapt this for savoury concoctions. 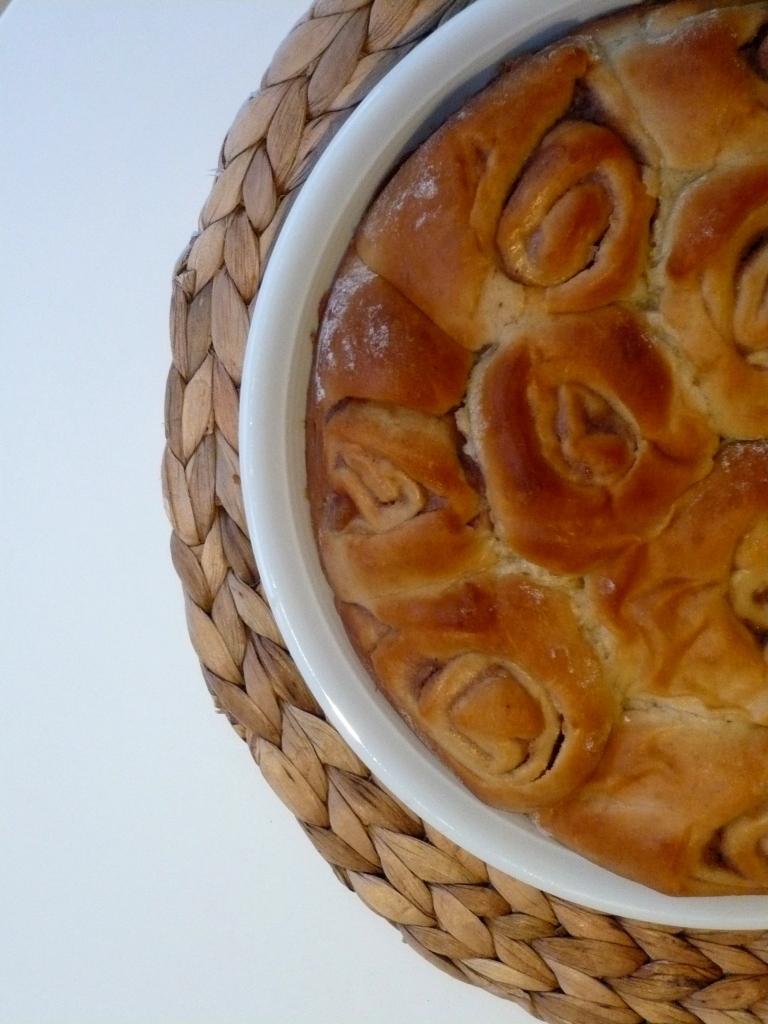 1.  Combine the milk, oil and 1/4 cup sugar in a sauce pan and warm-up on a small flame until the milk is hot but not boiling.  Sprinkle the yeast over the milk and mix in 2 cups of flour.  Let sit covered with a teatowel  somewhere warm for at least 1 hour (I put the bowl next to our heater and surrounded by pillows to keep the mixture warm).

2.  Mix the remaining 1/2 cup with the baking powder, baking soda and salt.  Mix this with the yeast mixture.  The dough will be very sticky at this point but don’t despair.  If there is one thing I have learned from reading Richard Bertinet’s book “Dough” is that one should not give in to the temptation of adding more flour to sticky dough.  The extra flour can easily add up to 50-100g (a huge proportion of the total amount of flour for most recipes) meaning you end up changing the dough’s consistency, making it heavier (thus less likely to rise) and drier.  However, even the stickiest dough can turn into a perfectly smooth and round dough ball with the right amount of kneading and in particular folding (to get more air into the dough).  Having spoken to my sister first, I knew the dough would be sticky so I just tryíed to persevere with my kneading and surely, after a few minutes, I had a velvety smooth doughball that wasn’t sticky at all!

3.  To prepare the chestnut filling, put the sugar, butter and chestnut puree into a saucepan and slowly warm-up over a low-heat, just long enough until the mixture is homogenous (you don’t want it to boil as the sugar would caramelise).  Leave to cool for a moment.

4. Roll out the dough to a thin triangle (ca. 1/2 cm thick).  Spread the chestnut mix on top, leaving about 1 inch free of filling.  Start rolling (the long side of the rectangle) towards you, ending with the spread free end.  With a pastry brush, brush some water on the edge of the dough, seal the roll by pinching the free end and the roll.  Cut roll into ca. 8 equally-sized pieces and put them, cut-side up into a greased springform.  Let rise for another 20-30 mins.