Dhal for days to feed the hungry masses at one of Jaipur’s many temples.
Shopping Jaipur-style.
Next instalment of trying as many different Indian flatbreads as possible these next couple of weeks. This was an Aloo Paratha - potato stuffed paratha. I like the idea of turning small amounts of leftovers into a proper meal by stuffing them into a flatbread. On the side some fresh vegetables and a cumin spiced Raita.
Could not end our first day in India without trying some local sweets, in this case the famous Gulab Jamun - little fried doughballs made with milk solids and soaked in a perfumed sugar syrup until twice their size. These were incredibly, served warm and with an almost velvety texture, and a syrup so delicately perfumed with cardamom. Heaven in a spoon. In fact it felt like being tucked into bed after a long day combined with a hug from your favourite person. You bet I already started looking up recipes for these and since milk solids are hard to get buy in Europe I was wondering whether Ricotta might be a good substitute. And turns out it is! So I shall add that to my ‘to experiment with’ list!
First of no doubt many Parathas and other flatbreads on this trip. This one was filled with paneer, but this one had a consistency almost like ricotta, a bit grainy and creamy. On the side, yoghurt with cumin, butter and an insanely spicy and delicious chili and garlic chutney. More please!
First chai of our trip, in a small non-descript cafe on the motorway outside of Delhi and on our way to Jaipur. Perfect way to warm up after a long day of travelling and a far too short night spent in a crammed airplane and while it’s still quite fresh and cold out (temps are meant to reach the low 30s today). 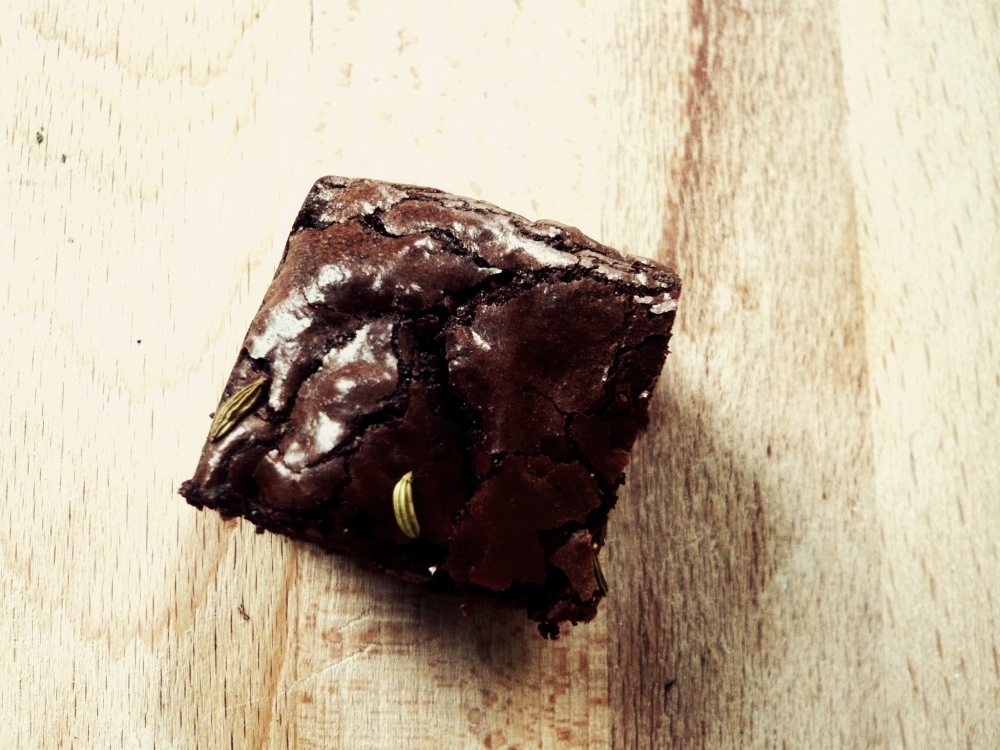 Although most people agree a brownie should be ‘fudgey’ (although to different degrees for different people) and never ‘cakey’, brownies can be tricky to bake as you are meant to pull them out of the oven a little early – so the little trick involving a toothpick to check for doneness of a cake just does not work for brownies – right when you are supposed to take them out of the oven, any toothpick you have used to prod your brownies will be covered in gooey chocolatey brownie dough. However, this would also have been the case 5 minutes earlier and would still be the case had you waited another 5 minutes.

Besides, brownie recipes are as rich as they get – they typically involve little flour and instead tons of chocolate, butter, eggs and sugar. As I like to bake with organic ingredients and only the best quality chocolate I can afford and locate, I am loath to waste precious ingredients on recipes that might not deliver and this is where this recipe came in handy.

The Guardian has a useful little column (http://www.guardian.co.uk/profile/felicity-cloake+lifeandstyle/series/how-to-cook-the-perfect) analysing recipes for crowdpleasers, going through pros and cons and key ingredients before picking a favourite. I have been following this column for years and have always had success when trying the recipes so when I saw the feature on brownies I knew it was time to put aside my hesitation and give brownies another try.

I ended up adapting the recipe slightly – I was keen to finally try baking with olive oil as a replacement for butter (hey it’s unsaturated fat, goes well with chocolate and after a colleague had given me 3 bottles of gorgeous olive oil straight from his parents’ olive groves I had ample amounts of olive oil to experiment with), I used brown sugar (for its toffee flavour), used a pretty large pinch of salt because that’s how I like it and after dividing the batter into two separate bowls, added grated orange zest to one bowl and fennel seeds to the other.

275g 70% cocoa chocolate, chopped (don’t be tempted to use milkier chocolate or the end result will be sickly sweet)
207g olive oil
43g water (the proportions of water to olive oil mirror the proportion of fat to water in butter, if you would prefer to use butter, simply use 250g unsalted butter and combine with the chocolate once melted)
300g brown sugar
3 large eggs, separated
60g plain flour
½ tsp baking powder
Large Pinch of salt
60g good quality cocoa powder
For the fennel brownies, 1 tsp roughly ground fennel seeds
For the orange brownies, zest from 1 orange

1. Start by melting the chocolate over a bain-marie.

2. While the chocolate is melting, whisk your egg yolks together with the water. Using an electronic whisk, start whisking your egg yolks, slowly drizzling in the olive oil while the whisk is running. This step effectively involves making mayonnaise as, just like with mayonnaise, the egg yolks here help to create an emulsion between the water and the olive oil.

5. Once the chocolate has melted, pour over the egg mixture and combine by hand.

6. Sift together the salt, flour, cocoa powder and baking powder. Combine with the egg-chocolate mix.

7. Split the mixture in half, adding orange zest to one half and ground fennel to the other half.

8. Pour each mix into a small cake pan (12x12cm) that has been lined with greased baking paper. 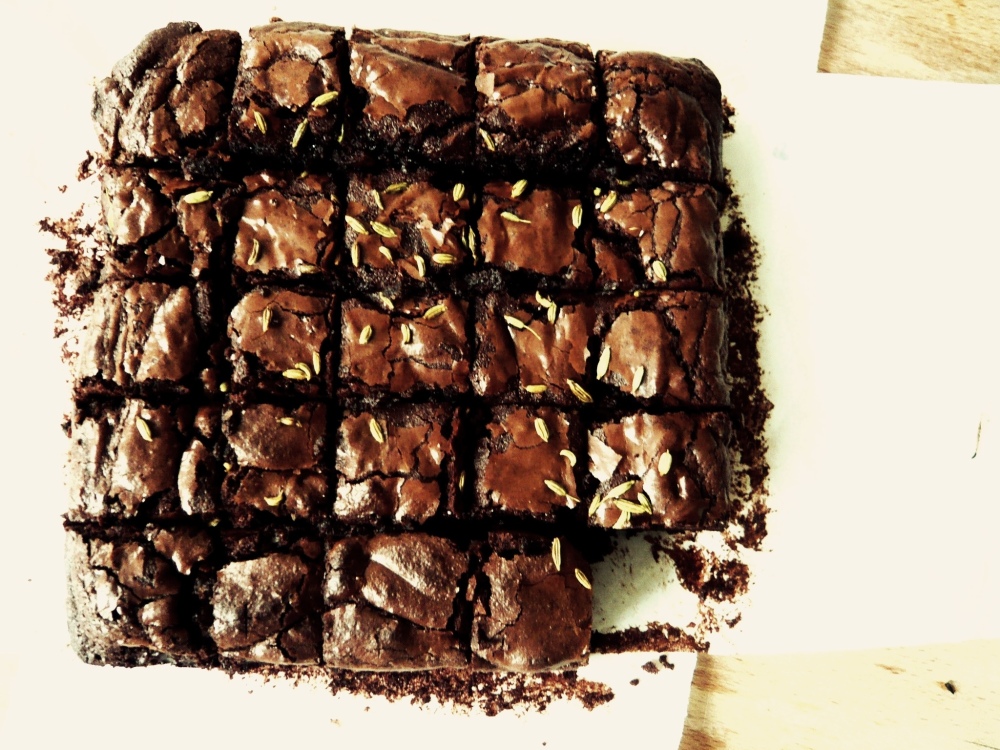 And, the verdict? Truly amazing. Hands down, the best brownie recipe I have ever used. The brownies had that perfect thin shiny crust that almost appears to float on top of the gooey brownies underneath. The chocolate taste was intense thanks to using extra dark chocolate yet the bitterness of the chocolate was nicely mellowed thanks to the brown sugar and the salt. And while I could not detect the taste of the olive oil the brownies they somehow tasted less rich than recipes with butter (e.g. Jamie Oliver’s recipe).

As for the additions, the chocolate-orange brownies were a clear favourite at work, while Alessandro preferred the fennel brownies. I loved both versions equally and am already dreaming up further flavour combinations based on this recipe – e.g. I am thinking about making white chocolate raspberry brownies and I am tempted to use olive oil again – I am curious to see whether you can taste the olive oil a bit better and, if so, whether a fruity olive oil would complement the sweetness of the white chocolate and the slight acidity of the raspberries as well as it does in my mind… 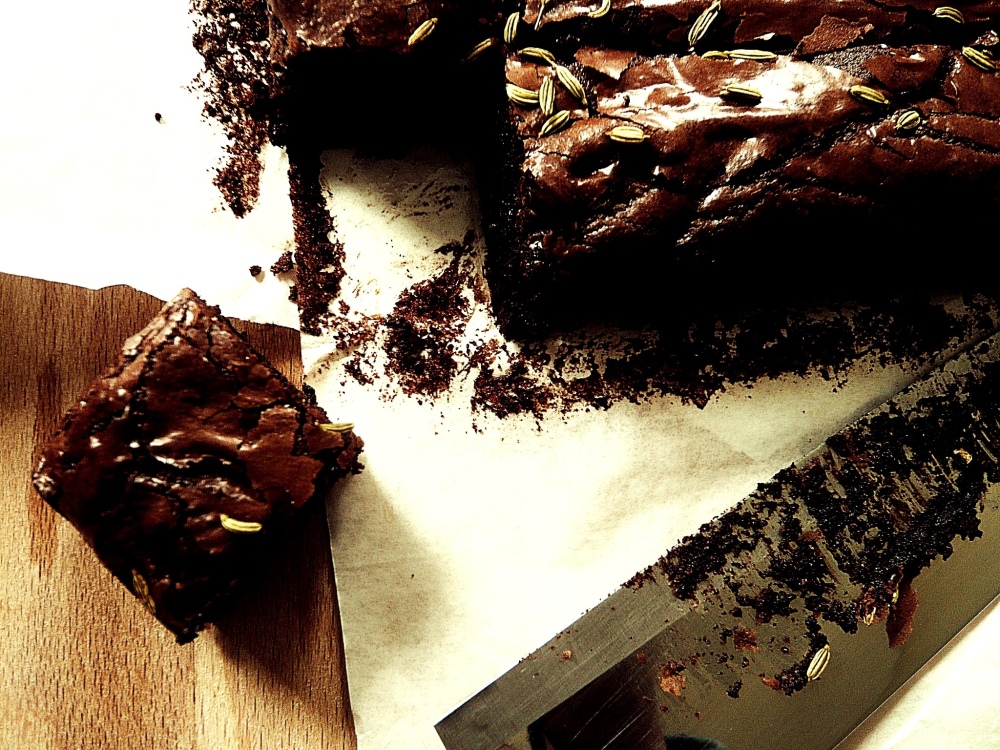 6 thoughts on “Brownies for Grown-Ups”