A new bakery just opened in my neighbourhood. Faced with an empty fridge and 3 days of work travel ahead of me it only made sense to pick up a little something for breakfast and check out the new place. Some people like testing bakeries based on the quality of their croissant, which makes a lot of sense. But I don’t care all that much about croissants. A pain au raisin, however, now that I can get excited about. And this was one of the really good ones. Flakey exterior yet chewy and soft interior, beautifully plump raisins and just enough custard to hold the different layers together. No overpowering sweetness or aromas like vanilla or rhum. Really good.
Sunday mornings call for lazy breakfasts in your pjs, right? And while I am generally more of a sweet breakfast person, sometimes only eggs will do. I started today with some scrambled eggs and bacon plus homemade sourdough toast but I just came across these fried eggs with labneh and za’atar oil on the blog that I need to recreate asap! If you want to have a go, the recipe link is in my profile.
The countdown is on. My big sister is getting married soon and when that wedding takes place near Jaipur and you have never been to India before, it only makes sense to tag on a proper holiday. Our tentative itinerary will take us from Jaipur to Jodhpur and Udaipur as well as Agra and the Taj Mahal. Since that will involve a lot of driving, we wouldn’t mind breaking some of those long drives up. Are there any must-sees in between those cities? Also, do you have any recommendations for hotels, restaurants, tourguides (eg walking tours, market tours etc) in these cities?
Thinly sliced persimmons. Shaved pecorino. Olive oil. Sea salt. Black pepper. Pul biber. Sumac. I never really paid much attention to persimmons until I tried some in Romania last week and it turns out I really like them. Saw a shaved persimmon salad on here a few weeks and decided to recreate this. Persimmons are at their peak now so this little dish was still quite sweet, even if I was quite generous with the pecorino, pepper and sumac. Next time I might mix in something else - I think thinly shaved daikon could be great, also in terms of texture. I think this would also stand up well to some sort of herby drizzle - e.g. some zhoug or za’atar olive oil. Or some fresh cheese like crumbled feta or buffalo mozzarella.
As delicious and cheap as homemade coffee is, nothing for me beats a slow start to the working day over an overpriced oatmilk flatwhite in a cafe on the way to work with a side of reading. Here, a new novel recommended by my mum that I am enjoying so much I am already worried about finishing it too quickly and plenty of recipe inspiration thanks to the latest @foudepatisserie magazine (lots of beautiful galettes des rois and pistachio baked goods in this one!).
‘tis the season for Galette des Rois. Last year I was lucky enough to be in Paris for work and pick up one of these individual-sized galettes from @dupainetdesidees that were incredibly buttery and yet so delicately sweetened - so good. 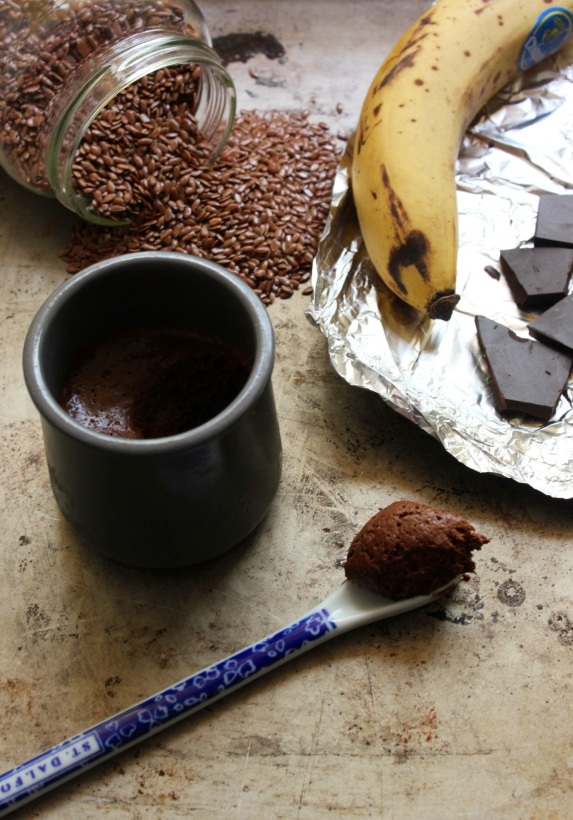 Although I am not vegan, the technical challenge of replacing eggs and other animal products without altering the final outcome of desserts and baked goods fascinates me. So much so that when I first heard about flaxseed ‘meringue’ I immediately bought a bag of flax seeds.

You may wonder what flax seed meringue is and why it is called meringue when it doesn’t contain any egg. So did I when I first heard about it. While flax seeds are a common ingredient in vegan baking where they are typically used to replace whole eggs (left to soak in water for a few minutes the flax seeds will become plump and the water surrounding them will change in texture, essentially becoming ‘gloopy’ for want of a better word, similar in texture to raw egg whites and with similar binding properties for baked goods), there seem to be rather few recipes using them to replicate whipped egg whites to make mousses, meringues or marshmallows for example.

While I am not sure who came up with the idea of making ‘meringue’ from flax seeds first, the idea is certainly not new as a quick search on the internet brought up discussions and posts from as early as the late 90s. And anyone who has had the good fortune of eating at Mugaritz, or at least picked up the Mugaritz cookbook, will have come across flax seed meringue already. Essentially, flax seed meringue consists of flax seeds that have been brought to a boil in a significant amount of water, simmering this until the liquid has reduced to a fraction of its original volume and the mixture resembles the texture of raw egg white – once strained to remove the flax seeds and cooled to room temperature, this gloopy mixture can be whipped to soft or even firm peak stage just like egg whites.

Unlike whipped egg white, this flax seed foam is much more heat sensitive and while I have not yet tried baking with it, I came across a few entries online that said you could bake the foam but at a maximum temperature of around 140 degrees Celsius only.

I finally set aside some time to start playing around with this new-to-me technique last week and below is the recipe for my first successful experiment using this flax seed foam. Knowing the limitations of baking with the foam given its heat sensitivity I knew I wanted my first experiment to use the foam in its raw state (a use which makes most sense to me anyway given that it avoids the typical food safety concerns over using raw egg whites and I liked the idea that the flavour neutral foam would add volume to a mousse but without distracting from the flavour of the other ingredients). I am curious to try baking with the foam as well – despite the heat sensitivity I have seen photos of almost perfect looking meringue.

I was inspired to make these little pots of mousse while flicking through the Sprouted Kitchen cookbook – more often than I would like to admit I pause when I get to page 218 with the recipe for these little flourless chocolate banana pudding cakes that are cooked in a water bath in the oven and which remind me of a favourite childhood treat. My dad has always been in charge of desserts at home and while his ice cream and sorbet repertoire has widened immensely over the last few years, when I was a child ice cream at our house came in two flavours only, chocolate and banana. I am not even sure why that is, but us 4 kids were content anyway – banana ice cream was perfectly sweet and, at least in the late 80s and early 90s, just exotic enough, and a scoop of his dark and somewhat bitter chocolate ice cream provided the perfect contrast to cut through some of the banana ice cream’s sweetness. And what can I say, this mousse transported me right back to that big table in our kitchen, sitting next to my big sister Helena, on those chairs my parents brought back from Morocco, the legs so high our feet dangle in the air, our dad looking sternly at me and Helena because we have again decided to let the ice cream in our bowls melt, stirring the runny mess together with our spoons before slurping the melted ice cream straight from the bowl. 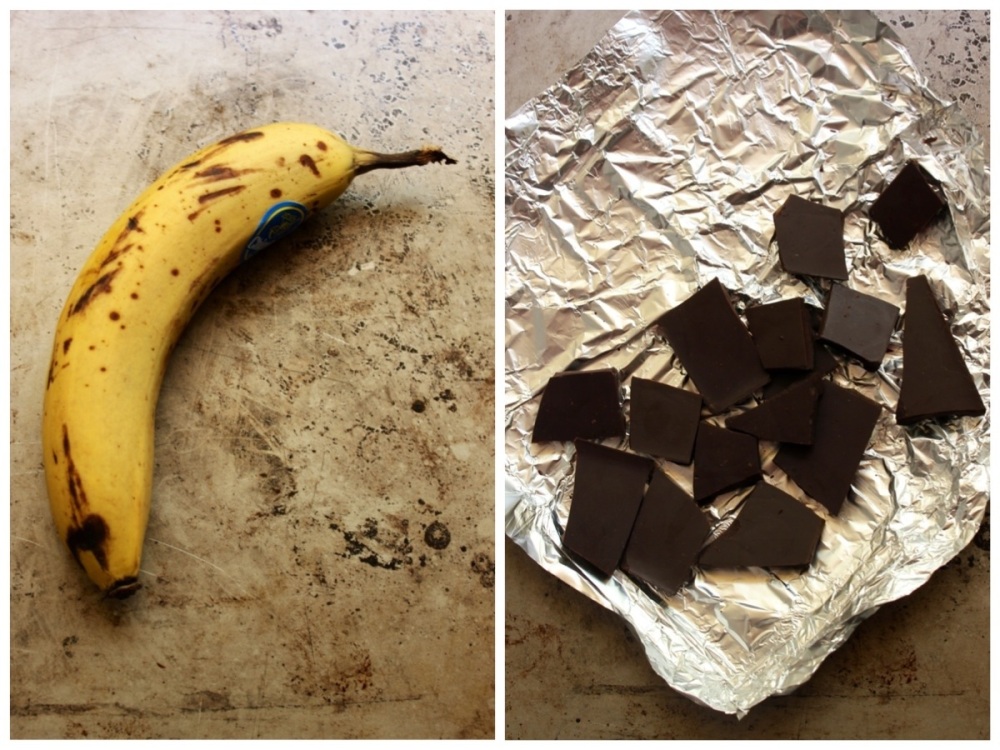 Note: while I used normal store bought chocolate here, this recipe can be made vegan simply by using vegan chocolate. The amounts stated below are enough to make 4 small pots of mousse, just enough for a small after dinner treat. For a slightly more decadent dessert I would probably serve this mousse alongside a thin slice of toasted banana bread (still warm), a scoop of creme fraiche ice cream and maybe a lick of salted caramel and some cocoa nib praline.

1. Using a double boiler, melt the chocolate. Add the pinch of salt and the banana.

2. Using an immersion blender puree the chocolate and banana until the mixture is homogenous.

3. Using an electric mixer beat the flax seed goo on high, slowly adding the sugar once the mixture is white and foamy (2-3 minutes). Continue beating the mixture on high for a total of ca. 15 minutes or until the mixture has reached firm peak stage.

4. Add 1/3 of the firm flax seed foam to the chocolate and banana mixture to lighten it before carefully folding in the remaining beaten flax seed foam.

5. Divide the mixture between 4 ramekins, cover with clingfilm and place in the fridge for at least a couple of hours to set before serving.

*For the flax seed goo, the recipes I have seen online appear identical – simply bring 50g flax seeds in 450ml water to a boil, reduce the heat to low and let the mixture simmer for 20 minutes or until the liquid has reduced to about a third and is gloopy and somewhat stringy – once strained you should have roughly 100ml of flax seed goo which should look almost identical to raw egg white (it might be a little foamy and/or appear slightly yellow/light brown). The goo will keep for 1 week in the fridge. As for the cooked flax seeds, you can stir them into yoghurt or muesli bowls or you could even incorporate them into a cracker recipe or fold them into the dough for a multi-seed loaf.