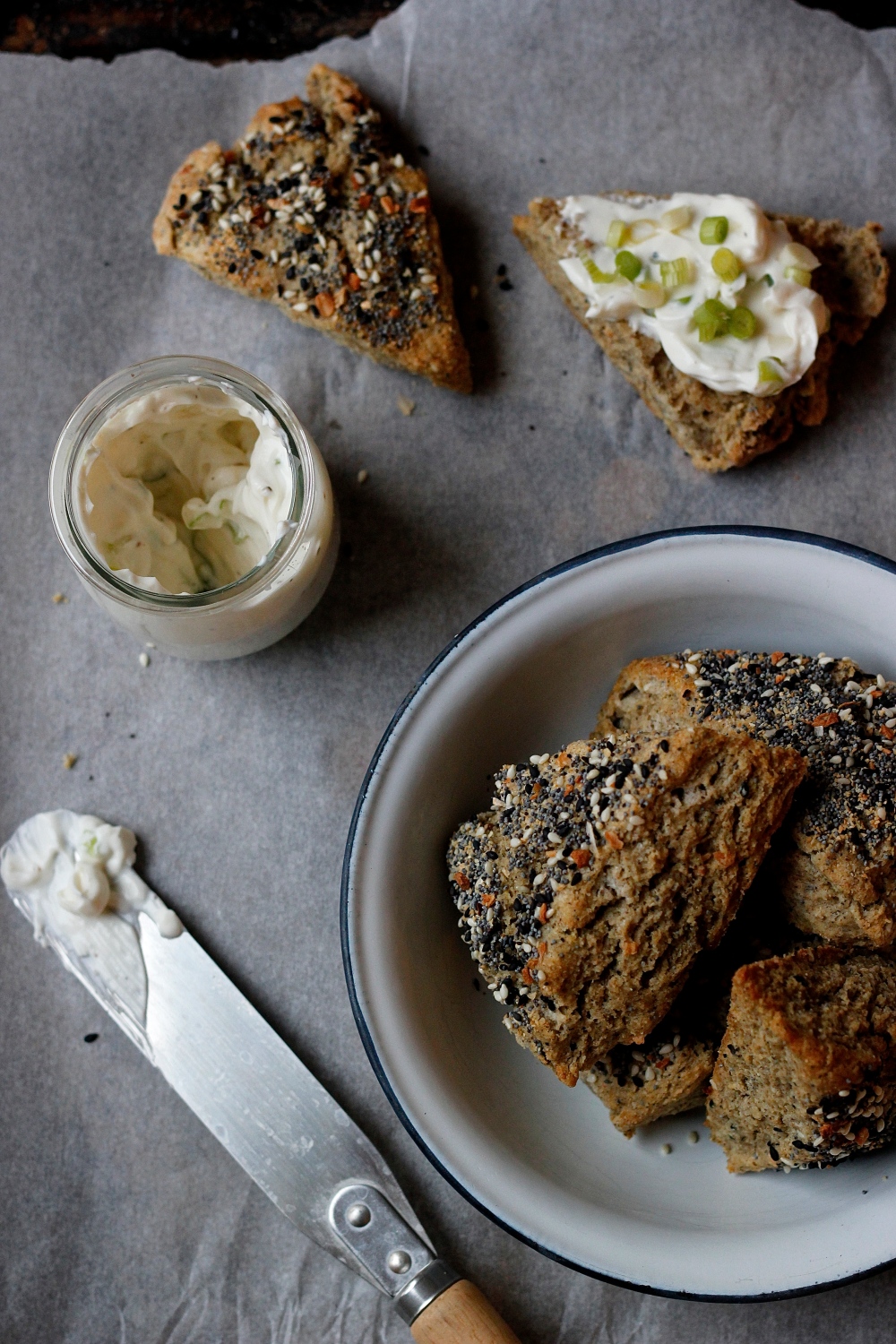 When my eyes first fell upon the SCAA’s flavour wheel I remember scanning the different flavours and at first nodding in agreement – citrus (yep), berry (yep), chocolate (yep) – and then my eyes fell on ‘alliaceous’ (garlic and onion) and I was a bit flummoxed. I had certainly never tried a coffee and thought – ‘hmm, not bad, I just wish it did not taste so strongly of onion or garlic’ (nor in fact have I ever reminisced fondly about a coffee that reminded me of our favourite alliums!). So I had to do some research to understand where that onion or garlic flavour in coffee can come from.

It turns out, there are two reasons why the flavour of coffee can remind you of onion and garlic. Both can be a side effect of ‘wet processing’ (also referred to as washed processing) of coffee beans, a process which involves coffee beans (after being removed from the coffee cherries but still retaining their mucilage) being stored in water-filled fermentation tanks for 4-48 hours.

While wet processing, which I understand is mainly used for arabica beans, is associated with higher quality coffees as the fermentation process is key to the development of the coffee’s complex flavour, the emergence of yeasts and mould in the water during the fermentation stage can lead to the final coffee tasting off (in particular, coffee may taste sour or indeed develop a flavour reminiscent of onions). Similar off flavours can result when the water used during the fermentation stage is not fresh. While certain off flavours can be desirable as they give coffee its particular flavour and body, a noticeable onion or garlic flavour can thus indicate poor processing and is clearly undesirable. 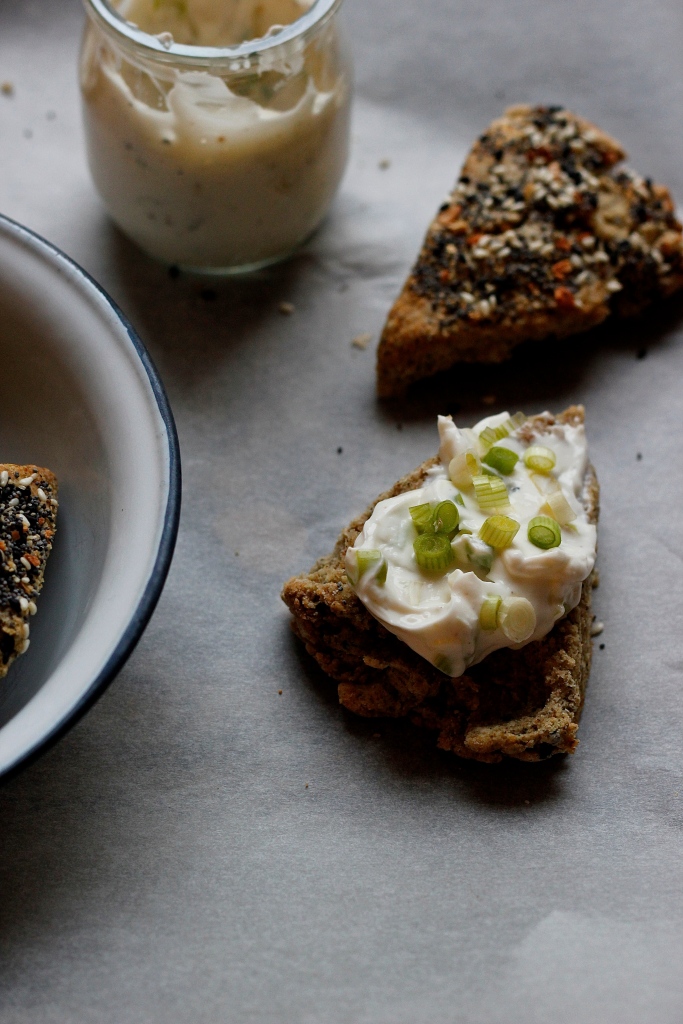 Leaving aside the reasons as to why your coffee might taste of onion and garlic or not, there is certainly no denying that a bagel slathered in cream cheese alongside a decent cup of coffee is a pretty perfect way to start the day. As partial as I am to sweet breakfasts, I make an exception when it comes bagels (and avocado toast if I am being honest), especially ‘everything bagels’ and scallion cream cheese – those bagels rolled in a generous helping of a mix of sesame seeds, poppy seeds, dried onion and garlic bits. And when the next decent everything bagel is an 8 hour plane ride away and you kind of want one NOW then these ‘Everything Bagel’ Rye Scones hit the spot just so. They may be no bagel but you can have them on your table in less than 30 minutes from when that ‘Everything Bagel’ craving first hit, so there is that.

All of which is to say that these ‘Everything Bagel’ Rye Scones are the latest recipe in the Goes Well With Coffee series and are my attempt of turning the flavours of garlic and onion into something delicious you can enjoy alongside your morning coffee (even if you might not actually want your coffee to taste of onion and garlic). 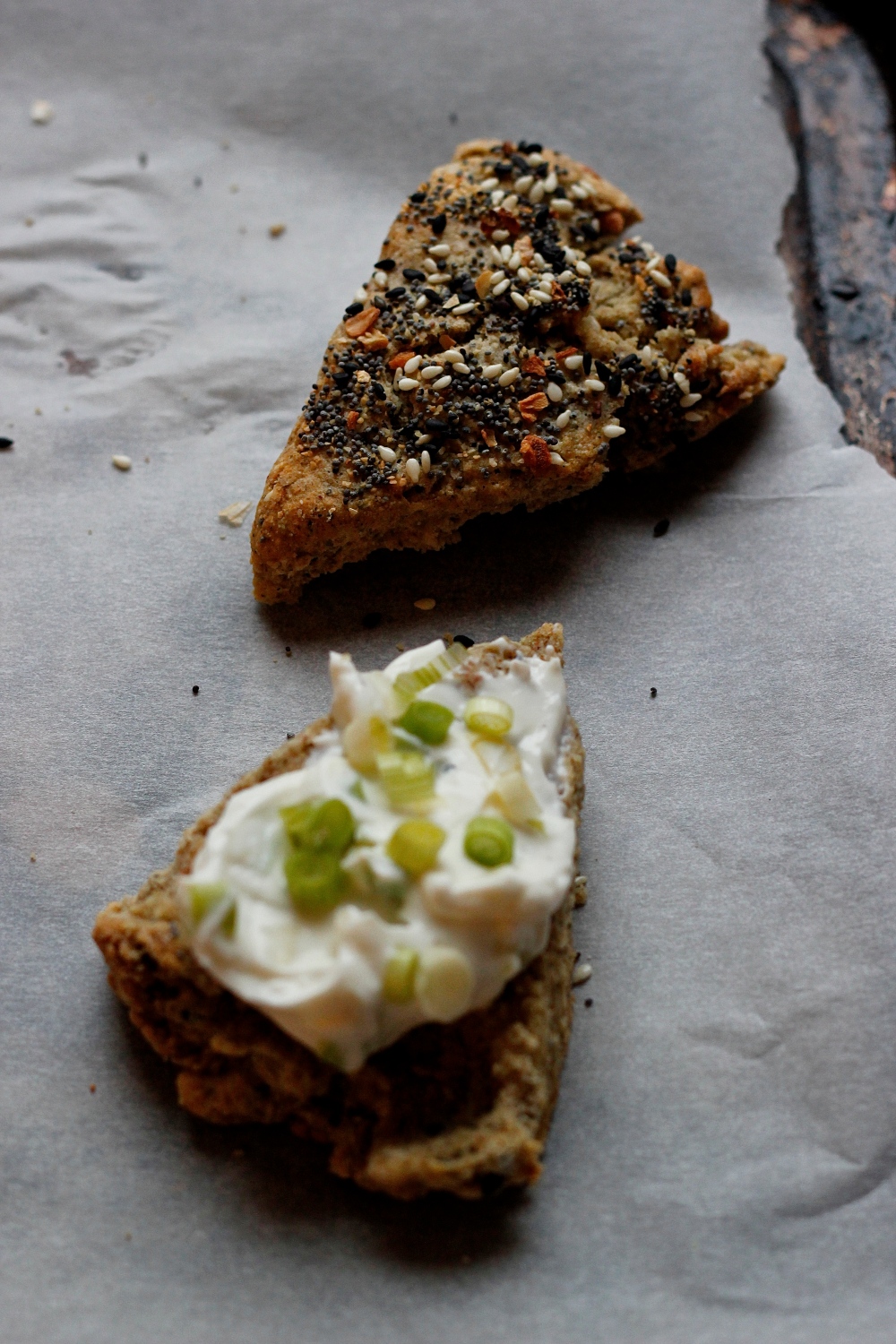 Note: if you follow the recipe to the letter you may find yourself thinking that these scones are rather small. Well, they are. If I am hungry, I will have two, otherwise, I will have one with some fruit and yoghurt on the side. They are also the perfect size to make for a brunch where people might want a scone but not a whole scone, lest it make them too full to fully enjoy the various brunch options.

Pre-heat the oven to 180 degrees Celsius.

In a large bowl whisk together the spelt flour, rye flour, salt, baking soda, the two types of sesame seeds, poppy seeds, dried onion and dried garlic. Add the cubed butter and rub into the flour. When the mixture appears sandy and there are no large chunks of butter remaining, form a well in the middle of the mixture and pour in the yoghurt and the milk. Stir everything together until you have a shaggy ball of dough.

Place the dough on a floured surface and knead briefly until you have a fairly smooth dough. Flatten into a round disk and cut into 8 triangles. Place each triangle on a sheet pan lined with parchment paper. Brush with a little milk and scatter the everything bagel mix over the scones, pressing the mix slightly into the scones to make sure they adhere well to the dough.

Bake for 20 minutes until the scones are well risen and golden brown.

While the scones are baking, prepare the scallion cream cheese. Whisk the cream cheese together with the milk to loosen it. Add the sliced spring onion and stir to combine. Season with salt and pepper. 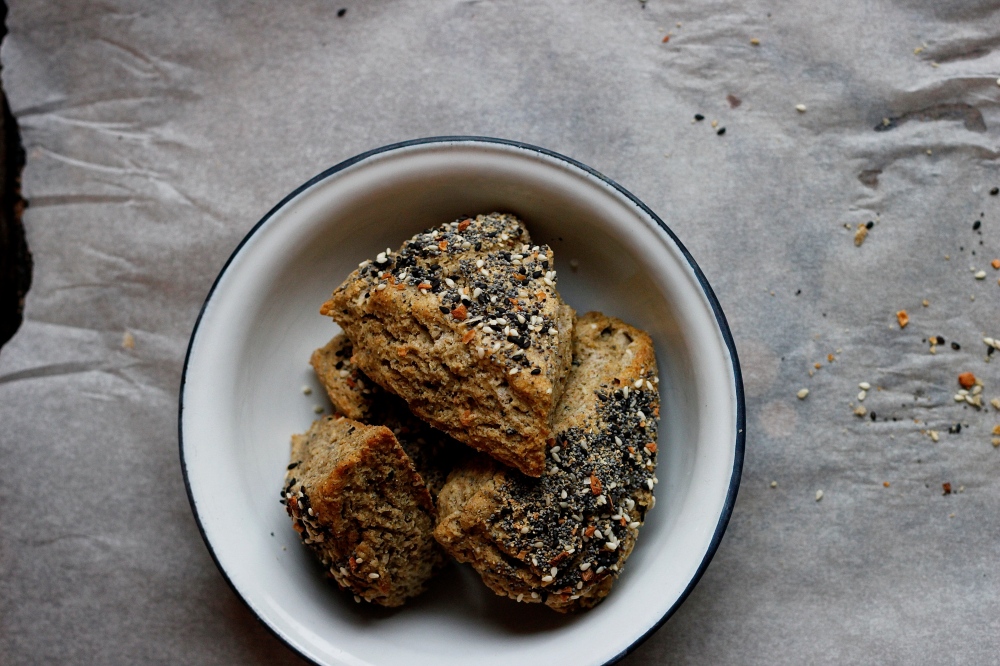