I already mentioned how Tartine was one of the places on my ‘must-visit’ list when I went to San Francisco a couple of months ago. All I really wanted was to try their bread. So when I scanned their breakfast menu, I was happy to see that they offered ‘bread and butter’ (plus a small pot of seasonal jam if you ask nicely). I also ordered a Morning Bun after reading so many people rave about them. But that is as far down as I ventured into their breakfast menu. I did not try their Emmer Porridge or their Roasted Pear Tartine. But what I regret not trying the most was the Coddled eggs, trout roe, horseradish, za’atar and grilled bread dish that both tables to my right seemed to be enjoying endlessly – the combination of eggs with za’atar, while new to me, immediately convinced me.

Now, to give a bit of context, I have to add that 2017 was very much the year of za’atar for me. A slice of toasted sourdough bread topped with labneh, za’atar and a sprinkle of sea salt was my favourite way of starting the day last summer. And then I started making manoush and my za’atar stash started diminishing at an alarming rate. Thankfully my parents stock za’atar in industrial quantities so I was able to replenish my stash over the Christmas break by filling a jam jar to the rim with za’atar (my parents actually have a 1kg bag of za’atar at home).

As soon as I came home from San Francisco I had to create this za’atar and eggs combination. And given how much I love labneh, into the mix that went as well. I played around with poached eggs at first but eventually gave up. I am not much of an egg-poacher, especially not before my first coffee. And while I do like them, I also don’t love poached eggs enough to deal with the hassle. So fried eggs with a runny yolk it was. And while this is more of a serving suggestion than a real recipe I nonetheless thought it worth sharing here simply based on how delicious it is. And maybe you have been looking for a new way to serve eggs anyway. And this one is definitely it. And I can imagine plenty more variations to this – a sprinkle of chopped coriander would not go amiss I am sure, or mixing some minced preserved lemon into the za’atar olive oil mix, for example. 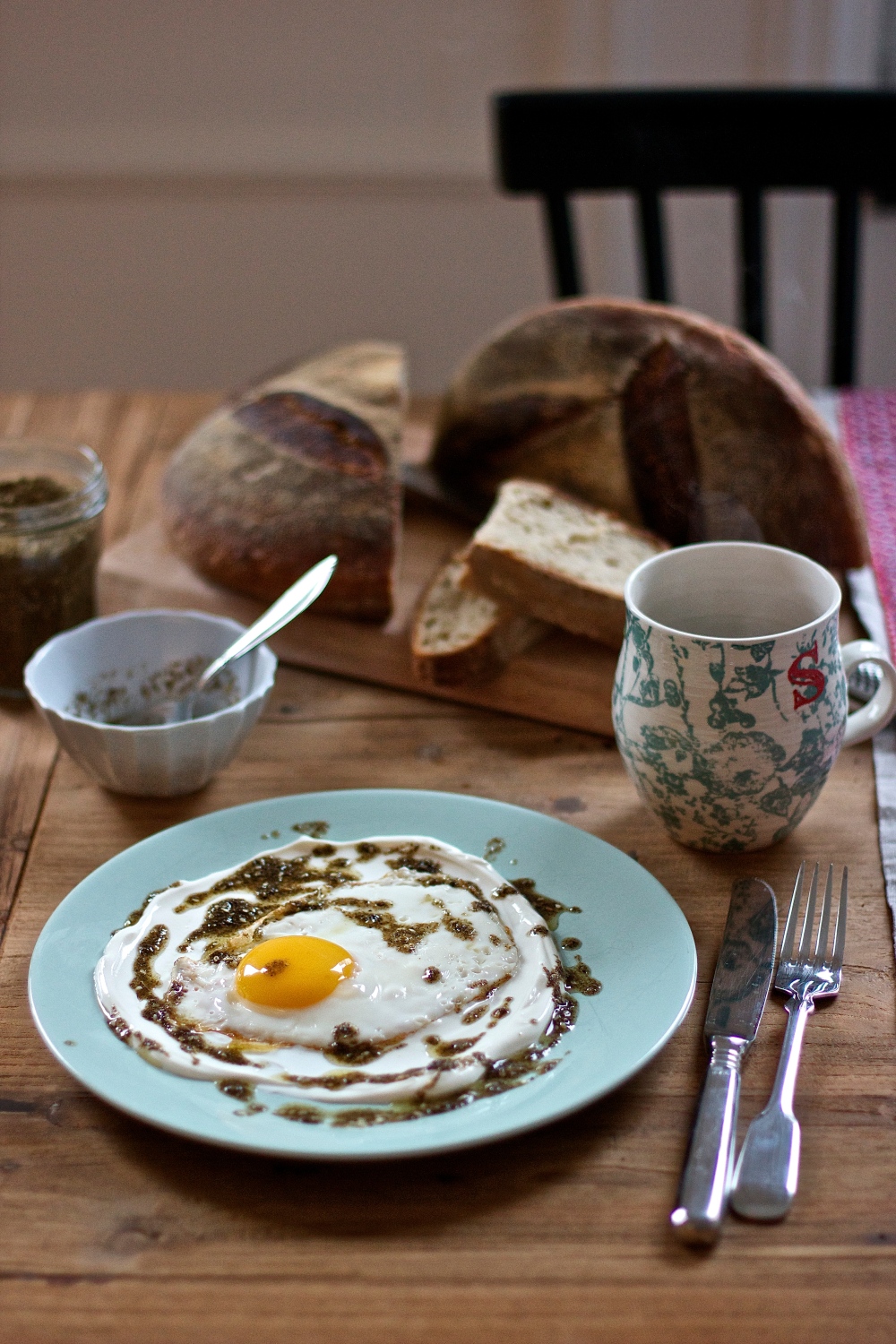 Eggs with Za’atar and Labneh

Notes: This recipe is all about the combination of eggs and za’atar. If you don’t happen to like fried eggs, and maybe have more egg-poaching talents than I do (admittedly a low threshold), go ahead and use poached eggs. And if soft-boiled eggs are more your thing, I suspect a generous dusting of za’atar on strips of toasted and well buttered bread would make delicious soldiers for that too.

Per person you will need:
1 egg
100g of labneh
1 tbsp of olive oil
1 tsp of za’atar
A pinch of sea salt
1 slice of sourdough bread

A little bit of oil for the frying pan

Heat the oil in a frying pan on medium heat. Crack the egg into the pan and cook to your liking (I like a runny yolk and the lacy bits of egg white not too crispy but appreciate everyone has their own preferences when it comes to fried eggs).

While the egg is cooking spread the labneh in a thin circle on a large plate (trying to get a circle slightly larger than your fried egg). In a small bowl whisk together the olive oil with the za’atar and a pinch of salt.

Once your egg is done, carefully lift it out of the pan and place it on top of the labneh. Drizzle the za’atar olive oil over the egg and labneh. Serve with a slice of sourdough bread.

2 thoughts on “Eggs with Za’atar and Labneh”