Almond milk seems to be growing more and more in popularity and it is probably my favourite non-dairy milk. Soy milk with its eggy taste never quite grew on me and I tend to find rice and oat milk either thin or starchy. Almond milk, preferably the unsweetened kind, has a really subtle flavour, is wonderful poured over cereal and creamy enough to make a decent dairy milk replacer in milky coffees.

There was a summer when I still lived in London when I made a lot of my own almond milk – a great alternative to the rather pricey packs of almond milk stocked by most organic supermarkets and that somewhat surprisingly tend to be full of a whole lot of sweeteners, thickeners and emulsifiers (and shockingly small quantities of almonds). Thankfully, this now appears to be changing, thanks in part to the girls behind The Pressery who sell their own freshly made almond milk across London. I was hoping to pick up a bottle of The Pressery almond milk when I was over in London the other week, alas my chicken pox had other plans for me.

Back in Brussels I stocked up on some organic almonds and thanks to a few rather warm summer days decided that the first thing I was going to make with my almond milk was Moroccan almond milk. Like the mint tea served all over Morocco, whether you go to a restaurant or someone’s house, Moroccan almond milk tends to be almost unbearably sweet but, just like Moroccan mint tea, it is also irresistible. Typically served over ice (just like Horchata), a few drops of orange blossom water and a sprinkling of cinnamon is what makes Moroccan almond milk so unique (and so delicious).

While the weather in Brussels is currently pretty horrendous (think days and days of rain and big fat clouds hogging the sky), there were just a few days last week where we had perfect summer weather and where nothing felt better than starting the day sitting on my balcony with a glass of this iced Moroccan almond milk. As much as I don’t miss the weeks and weeks of 40 degree weather I had to endure in Rome last summer when baking, cooking, heck any kind of movement, was out of the question during most days, I do hope Brussels has a few more days of real summer weather in store for us this year to enjoy iced drinks like this almond milk and iced coffees (especially as I have just discovered the first place selling cold drip coffee here in Brussels!). 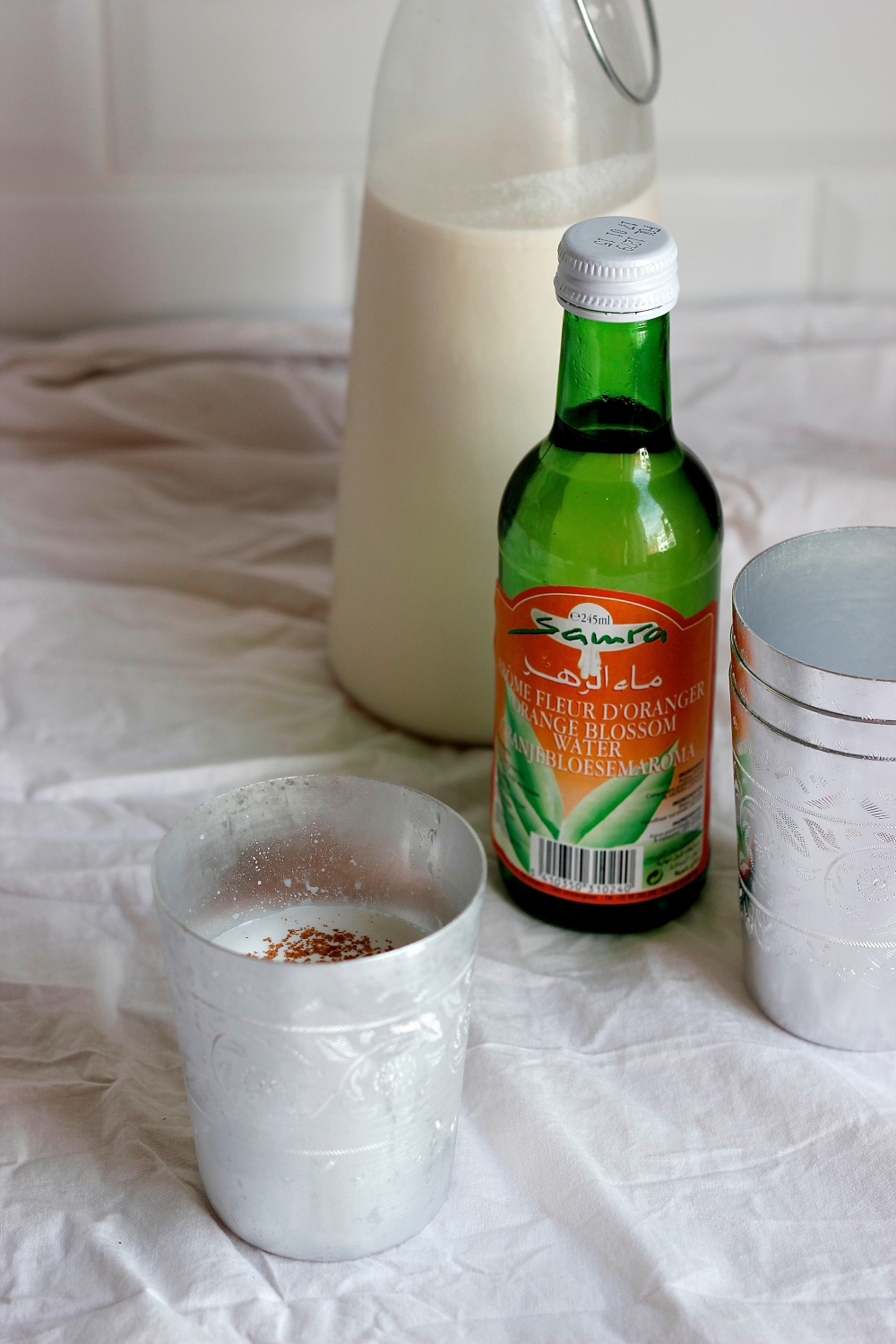 Note: The recipe below is effectively two in one, or maybe one and a half: a recipe for homemade almond milk, which really could not be simpler (and while having a nut milk bag is useful it is by no means essential, a piece of cheesecloth or a clean tea towel will do the trick), and a recipe, or rather a suggestion, for giving your homemade almond milk a Moroccan touch with some orange blossom water and cinnamon. While you could use store-bought almond milk, unless you have access to really good quality fresh and creamy almond milk I would recommend you make your own. It tastes so much better, will keep in the fridge for a few days and is very straightforward to make. While most recipes for almond milk recommend using blanched almonds, I always use the unblanched almonds – they are cheaper and it saves me the hassle of blanching them myself. And while the almond milk in Morocco is tooth-achingly sweet just use however much sweetener feels right to you – I often don’t use any sweeteners for this or just a small amount.

Directions
1. Place the almonds in a big bowl and cover with water. Place somewhere cool to soak for 8h or overnight.

2. Discard the soaking water and add the almonds to your food processor. Add 500ml of the water and process until the almonds are finely ground.

3.Strain using a nut milk bag or a clean cheesecloth or clean tea towel resting in a sieve or a colander suspended over a large bowl. You might want to strain the almond milk twice to remove even the finest almond pieces. Add the remaining 500ml water and whisk to combine.

4. To serve, add a pinch of cinnamon and 1/2 teaspoon orange blossom water per glass (250ml), stir and serve over ice. If you prefer a sweeter almond milk, stir in some simple syrup, honey or other liquid sweetener to taste (most Moroccan recipes call for 150g sugar per litre of almond milk – for me that is far too sweet, but gives you an indication as to how sweet you can make this recipe should you so wish).

5. The almond milk will keep fresh for about 5 days if stored in the fridge. The milk may separate but this is normal in homemade almond milk – just shake the closed bottle before using if the milk separates.

For my next batch, I might add some macadamia nuts to the mix as this article in the New York Times has made me curious to see how much creamier a nut milk I might be able to make at home with that.

As for the leftover almond pulp, you can add this when making granola, baking bread or making nut-based porridges.

In case you are not going to use it within a couple of days, you should freeze the almond pulp as it spoils fairly quickly, even when stored in the fridge.