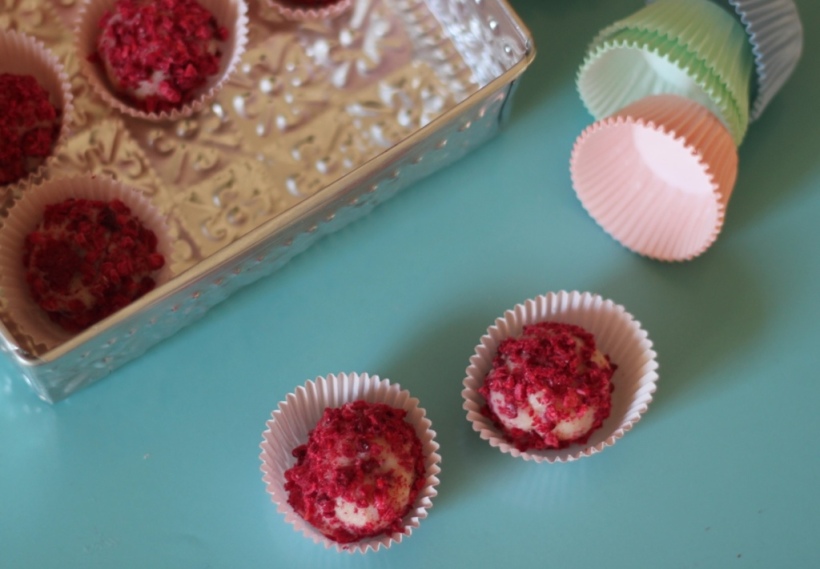 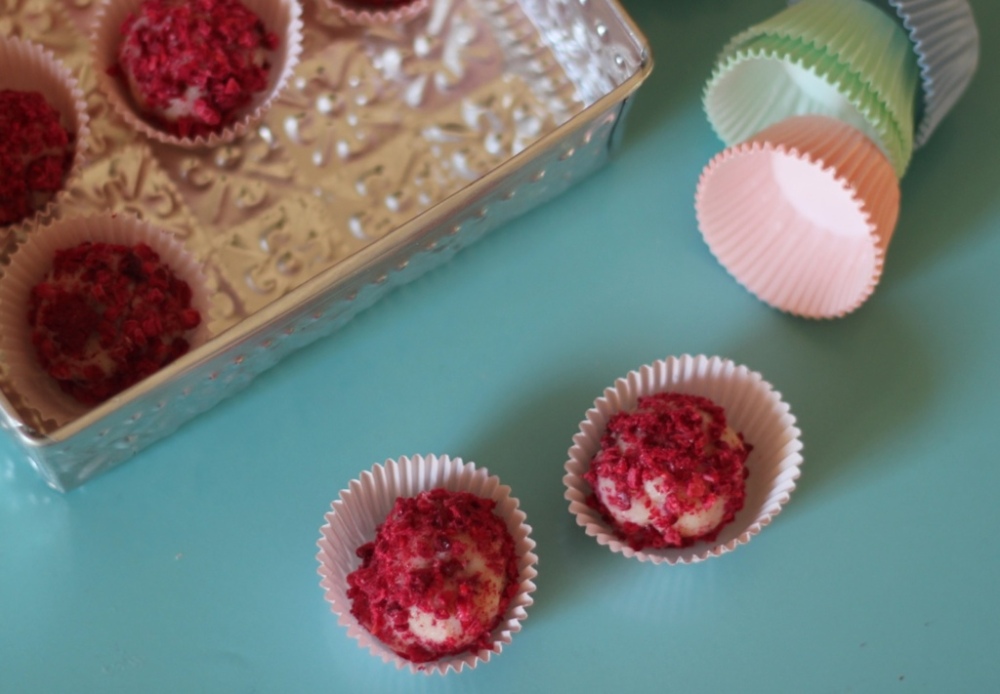 Valentine’s Day isn’t something that has played a major role in my relationship with Ale. Thanks to a long-distance relationship, a deployment to Afghanistan and one to Kosovo we were rarey together on Valentine’s day. This year is the first time in a long time that we are in the same city (and in fact even sharing an apartment) on Valentine’s Day. And while neither of us is very romantically inclined, there was nothing I wanted to do more on Valentines’ Day but to cook for my man – a bad and overpriced meal we had one year taught us to stay far away from restaurants on Valentine’s Day and, after all, it’s our shared love of good food which brought us together.

I probably started thinking about possible menu items around Christmas and only settled on a final set of dishes earlier this week (after a last minute (successful) treasure hunt for fresh mint).  We feasted on smoked salmon and fennel ‘ceviche’, a plate of home-made spelt spaetzle with peas and mint and pecorino sardo followed by little parcels of rainbow trout with fresh fennel, pomodorini and fennel seeds.  All washed down with a bottle of Giunco, a pretty potent white wine from a winery in Sardinia we visited a few years ago.

One thing I knew from the start is that I wanted to make some chocolates to have as a little petit-four with coffee since chocolates seem to be the stereotypical Valentines’ Day present. 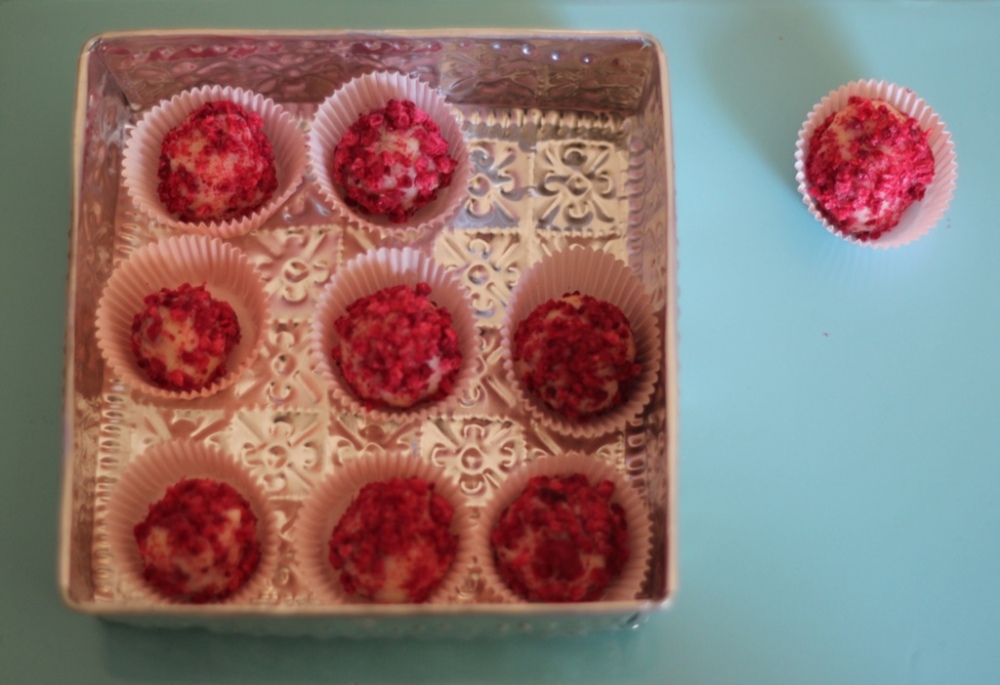 Back when I went to boarding school in Brighton, every so often my sister and I would wander around the Lanes, eventually heading to our favourite chocolate store, Montezuma (this was long before  they opened a store in Liverpool Street and started stelling their chocolates in Planet Organic and Wholefoods).  Come late spring, they would bring out the strawberry champagne truffles and, my favourite, little round disks of white chocolate studded with raspberries and shortbread crumbs.

Now strawberry and white chocolate might be the more common flavour combination but, for me, nothing beats white chocolate and raspberry – raspberries have such a heady perfume, are a bit tangy (which cuts nicely through the richness of white chocolate) and some bite from the little seeds.  So I did not hesitate one second when I saw a bag of freeze-dried raspberries in Whole Foods on my last trip to London, knowing these would come in handy very quickly.

Enough of the rambling, the recipe is very simple, adapted very loosely (for simplicity’s sake) from a flavoured white ganache recipe I found in my new favourite pastry book by F. Migoya.

Ingredients (makes approx. 9 regular-sized truffles, I guess you could make them smaller, or bigger), loosely adapted from F. Migoya, The Elements of Dessert

1.  Heat the butter with the cream on a medium flame until the butter is melted and the mixture starts steaming.  Take mixture off the flame.

2.  Pour cream and butter mixture over the chopped white chocolate.

4.  Leave the mixture to cool down to room temperature before placing in the fridge for 2-3 hours until the mixture is firm enough to be shaped into balls.  (And I would recommend covering the bowl with a lid/clingfilm – ganache easily picks up other odours given the high fat content).

5.  Crush the remaining freeze-dried raspberries on a plate with the back of a spoon (I liked the little chunks of raspberries on the outside of the truffles, but you could also use a mortar and pestle or a food processor to produce a fine pink powder to roll the truffles in).

6.  Using a teaspoon take 2 teaspoon sized lumps of the truffle mixture and quickly roll into balls.  Roll in the freeze-dried raspberries and set aside.  Continue until all the truffle mix has been used.

7.  The truffles can be served immediately or stored in the fridge for up to 1 week.  You can keep these at room temperature as well for a couple of days but as there is no chocolate coating around the truffles, the mix will soften a bit. 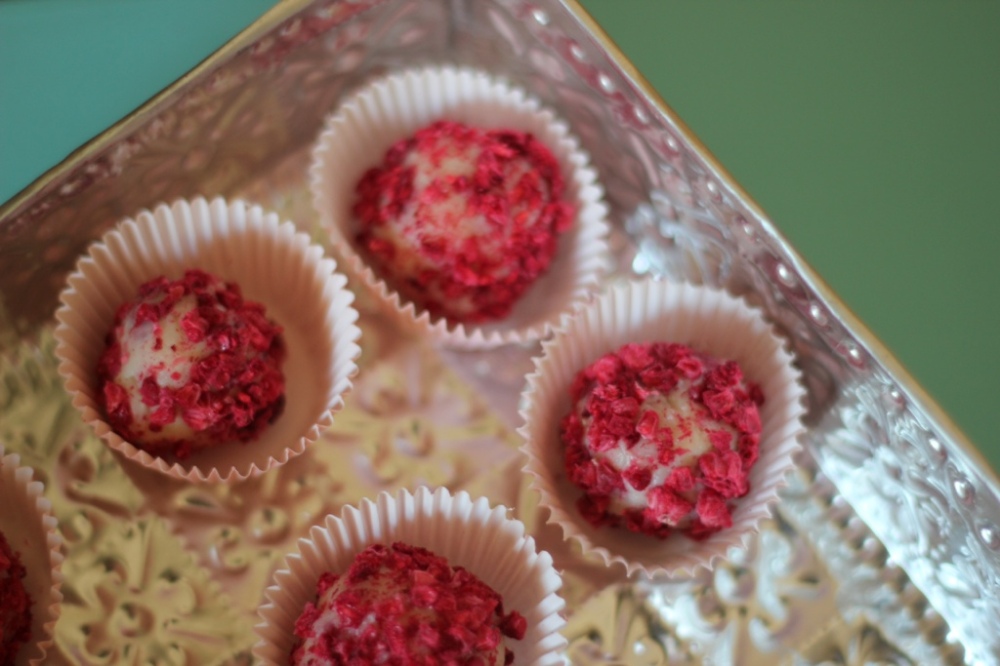