House-hunting – the bane of my existence. While the past 12 odd years of moving across Europe (Germany-Austria and back, Germany-UK and back (a few times), UK-Brussels and back and, lastly, UK-Italy) have taught me a great deal about minimising the stuff we all drag around with us (well, except for my cookbook collection, but I am not willing to part with that) and to wrap my beautiful bowls I bought when we went to Japan carefully enough to survive a move half-way around Europe, the one thing I am still utterly crap at is house-hunting itself. I know what websites to use, what sleazy property agents to avoid, what questions to ask prospective landlords, what hidden costs to look for etc, but at the end of the day I struggle with the simple fact that, at least if you are renting in large cities, you will never find a place that ticks all your boxes. Now add a boyfriend to the equation and that list of boxes (and non-negotiables!) just got longer. 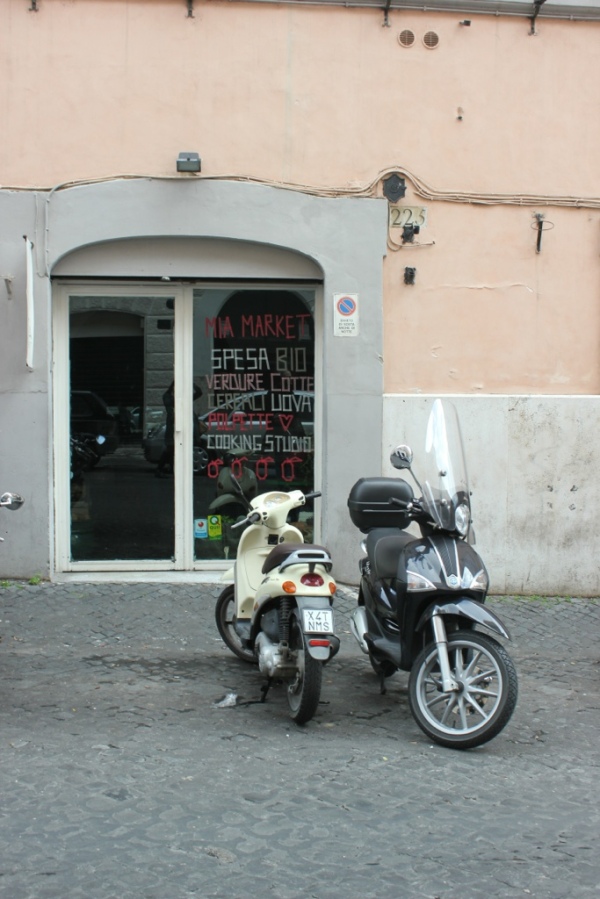 So for the past month and a half the two of us have been scouring craigstlist, picking up the local small ads newspaper, discussing our non-negotiables (mine is, no surprise, an oven and a stove with 4 hobs – surprisingly hard to come by in central Rome if you have a somewhat limited budget – his? Storage space big enough to put all our suitcases, skiing gear etc. in), viewing flats during our lunch breaks and after work, spending Saturday mornings getting up early for further viewings and generally trying to avoid wasting our time by trying to decipher all the ‘bullshit’ (excuse my French) prospective landlords tell prospective tenants (never in my life has the word ‘light-flooded’ been so ill-placed as when used to describe the myriad of dingy and dark flats I have seen over the past few weeks).

Alas we have finally found a place in our favourite neighbourhood in Rome, Monti (see the various pictures in the post to get an idea of what Monti looks like) – although I am keeping my fingers crossed until the contract is signed, we have received a set of keys and said keys fit the lock of our flat.  I am itching to get back into the kitchen (which is spacious!) as my brain is in overdrive with coming up with ideas for what to cook/bake next!

Now that our move date is near (eek, only 2 more weeks!) and most of our life has already been packed into boxes, dinners have been straightforward to say the least – I was actually proud the other day at having whipped up something akin to a real dish in the form of a summery salad of watermelon, sliced peaches, some crumbs of Ricotta Salata (a cheese similar to Feta but milkier and with a less creamy texture) and dressed with some olive oil, torn parsley, chili and some Maldon sea salt flakes – some nights dinner was pretty much a bowl of yoghurt with a banana.  At least it is only a few more weeks until we can get settled into our new place and I can get my hands dirty again in a kitchen. Until then, I will daydream about these dishes:

1. These olive oil pastry tarts with a chocolate avocado filling.  I love Laura’s blog with all my heart – every single post is photographed so beautifully and I have yet to come across anything she has made I did not want to immediately devour.  The olive oil pastry shell is totally intriguing to me – while I bake a lot with olive oil I have yet to make pastry with it.  And the avocado chocolate filling? Yes, please! I tried something similar the other day using avocado, Valrhona cocoa powder, Maldon sea salt and maple syrup to make a mousse and it was divine – incredibly rich and chocolatey and I can see how something similar would work well oh so well as a tart filling.

2. The Minimalist Baker’s Horchata recipe reminded me that it’s time to whip out my food processor again, make some Horchata, some ice cubes and sit back slowly sipping a glass of refreshing cinnamon-spiced Horchata … or indeed pouring it over a glass of iced coldbrew coffee (a trick I learned from the Spanish deli around the corner from my old office).   And while we are on the subject of home-made nut or cereal milk – head over to Shanna’s blog for a lesson on making your own almond milk.  Oh and if you decide to make your own Horchata, may I recommend blasting this song while you do so?

3. It’s early in the season but the first peaches are starting to appear.  While I know I am particularly partial to fennel at least I can blame Gelupo for coming up with the genius idea of pairing peaches and fennel.  If I get any say in this, there will definitely be some more peach tarts filled with fennel-infused pastry cream this summer.

4. Until a summer spent by the beach in southern Italy it never occurred to me that watermelons actually grow in Italy but now that I know that I can justify my addiction (how else can you explain the fact I once ate a 20lb watermelon by myself in less than 48 hours) in wanting to eat locally and reduce my carbon footprint – expect versions of this salad to pop up on my instagram over the summer.

5. And just as I was reading about (and, quite honestly, trying to work out what it would taste like) vanilla-scented tomato jam, I came across a recipe for goat’s cheese panna cotta served with candied tomatoes.  And however much I try to imagine what this tastes like, my brain and taste buds won’t compute the sweetness of the dish with the slight acidity of the tomatoes and the savoury goat’s cheese.  I guess I have to make this to know more!