I once read an article about that strange feeling of returning to a city where you once used to live. To discover that this city has not been preserved in some kind of time bubble. That life in this city has moved on. Your friends have made new friends, filling that small hole your departure might have left. Shops have shut or moved. Restaurants have come and gone. How odd this is, whether or not this city has a special place in your heart or whether you were in fact glad to leave it when you did.

It feels like I have spent most of my twenties either moving to London or moving away from London. After university and law school there I spent some time in Germany, working in a law firm to save up enough cash to travel around Argentina and Chile for a few months (which, incidentally is where I met Alessandro). I came back to London for my training contract only to leave again after 18 months for a 6 months stint in Brussels where I finished my training contract. It was back to London to start life as a lawyer before moving to Rome in 2012 and, earlier this year, to Brussels. From where I stand now, I probably won’t ever move back to London permanently (even if past behaviour might indicate otherwise and although my friends are secretly or not so secretly hoping I will come back one day). And while I have always had a love-hate relationship with the Big Smoke (as amazing as London is, it is not always an easy place to live), I miss it dearly and I try to go back as often as I can.

When I do go back, London doesn’t feel any different from when I used to live there (in fact whenever I sit on the 38 bus going towards Angel I have to remind myself that I no longer live just off Essex Road but instead should get off the bus at Angel tube station for the short walk to my sister’s flat by the Regent’s Canal). But London certainly looks different. Much like New York and other major capital cities, London is in a constant flux of shop openings and closings, pop-up events, new restaurants and cocktail bars, former dodgy neighbourhoods becoming the new ‘place to be’ etc. It is almost impossible to keep up with the momentum when you live in London – it is practically impossible when you no longer live there. But when I do go back I always enjoy trying a few new places together with my old favourite hang-outs. One of those new-to-me places that I recently went to for the first time is the ACE hotel in Shoreditch.

A few months ago my sister Helena, my friend Verena and I had spent an afternoon spent wandering around East London before getting caught in a downpour. Given where we were, the ACE hotel seemed like the closest dry spot that would also serve us a cup of decent coffee. While we didn’t stay long in the end, I do remember rather vividly the mini pistachio olive oil cake I ordered. Because it was by far the best pistachio cake, the best olive oil cake, and in fact the best nut-flour based cake I have ever tasted. It was a far cry (in a good way) from most nut cakes I have eaten – not dense at all, rather very light and moist but without being in the slightest bit greasy. Bright green from the pistachios, the flavour of the cake was surprisingly delicate – a grassy olive oil contrasting with yet also rounding out the flavour of the pistachios, a little lemon zest adding some wonderful brightness. 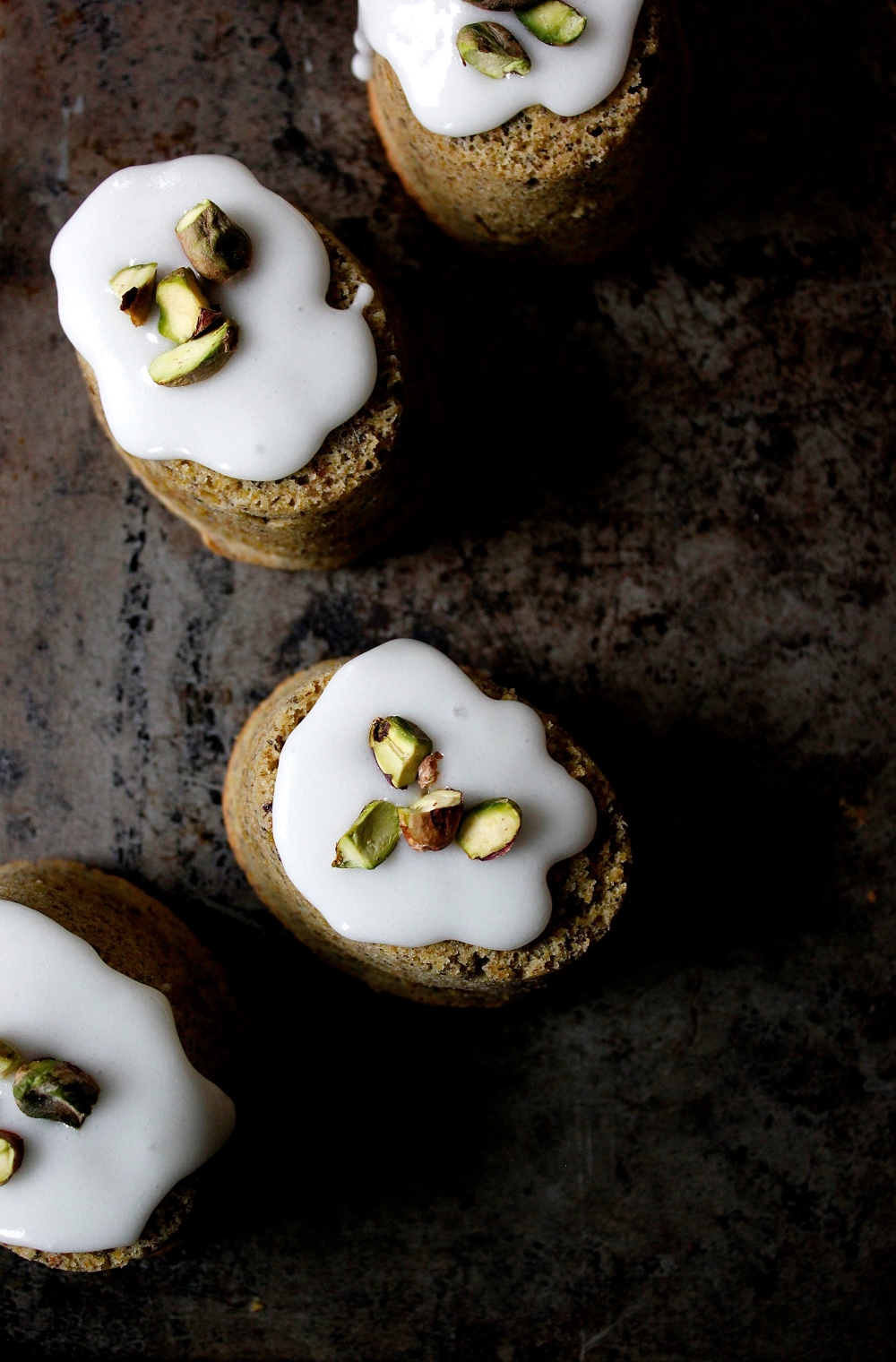 Pistachio flour, whether you make your own from whole pistachios or buy already ground pistachios is expensive, likely at least twice as expensive as almond flour, so I use it sparingly. Sparingly in the sense that I do not often bake with it but when I do it has to be a recipe where the flavour and colour of the pistachios will shine. I think that these miniature pistachio and olive oil cakes are as close to the cake I had at the ACE hotel as I can get without knowing their actual recipe. What these cakes most definitely have in common with the one I tried at the ACE hotel is the gorgeous green colour (which, sadly, does start to fade after the first day or so), and the wonderful balance of flavours between the pistachios, the grassy olive oil and the bright lemon zest. They were also a wonderful way to use the pistachio flour Alessandro bought me a while ago and which I had patiently been waiting to use until the right occasion.

Pre-heat the oven to 180 degrees Celsius and grease 9 friand tins or 9 small cake or muffin tins.

In a large bowl whisk the egg yolks with an electric whisk while slowly pouring in the olive oil, followed by the milk. Add the sugar in one go and whisk to combine.

In a separate bowl whisk together the pistachio flour, the spelt flour, pinch of salt and the lemon zest. Fold into the egg yolk mixture.

Carefully spoon the mixture into your tins. Place in the oven and bake for ca. 25 minutes or until well risen and a wooden skewer inserted into the middle of the cakes comes out clean. Leave to cool in the tins for 5-10 minutes before carefully removing the cakes from their tins and setting aside to cool completely.

In a small bowl whisk together the yoghurt with just enough icing sugar to get a thick but pourable glaze. Top each cake with ca. 1 teaspoon of glaze. If using, scatter a few chopped pistachios over each cake.