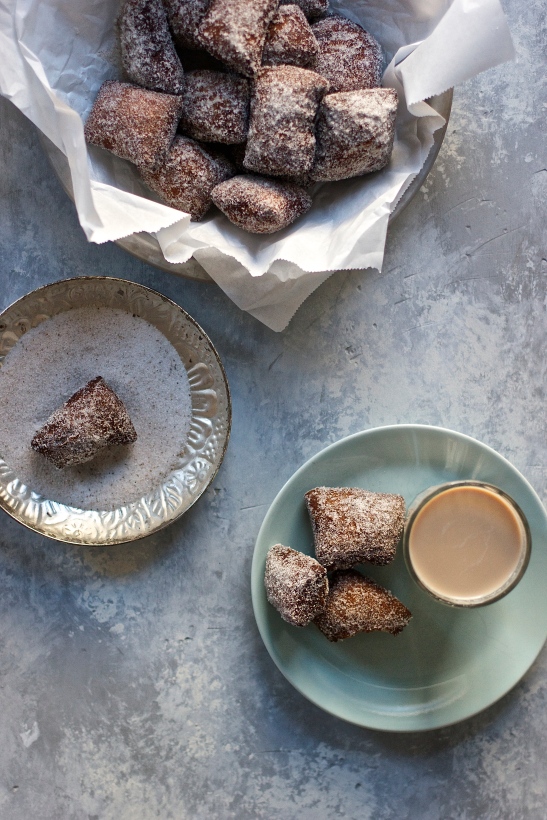 2018 for me was very much the year of being afraid of new things but doing them anyway (going on a city trip with a new friend who I only knew through instagram up until that stage? Tick! Buying an apartment all on my lonesome in a new to me neighbourhood here in Brussels? Tick! Hosting my first Supperclub with my friend Kaja? Tick! Asking my favourite Café to sponsor coffee for said first Supperclub? Tick. Teaching my first Cooking Class with Kaja? Tick tick tick. ). And since none of this resulted in any disasters, the plan for 2019 is to simply continue with this and to keep trying new things. So the first recipe up on the blog this year is very much in the spirit of that since the idea of pairing banana and garam masala had been on my mind for far too long and it was high time I acted on that idea.

Garam Masala is not a spice mix that lends itself as easily to sweet applications as say Chinese Five Spice Powder (I blame the cumin). And yet, one of my all time favourite chocolate bars is a beautiful creamy milk chocolate studded with coarsely ground garam masala. So it’s no surprise that I cannot stop playing with it in my kitchen (see these Palmiers, these Chocolate Garam Masala Snickerdoodles, this Couronne and this Stove Top Granola).

When it came to the idea of pairing banana with garam masala, it took me a while to figure out how best to implement this idea. I knew I wanted some kind of fritter or beignet you could enjoy alongside a cup of Chai, either as an indulgent breakfast or afternoon snack. Key for me was to make sure you could really taste the banana. Equally, I wasn’t keen on fritters with chunks of banana since I don’t care for the texture or flavour of cooked banana. But blending banana into the dough itself posed two problems: making sure that there was enough banana so as not to be masked by the flavour of the other ingredients but also making sure that the addition of sufficient amounts of banana did not make the dough too wet to handle easily. In the end, I used the same trick I have used in the past when trying to maximize the banana flavour in baked goods and other desserts: replace the liquids in the recipe with pureed banana. 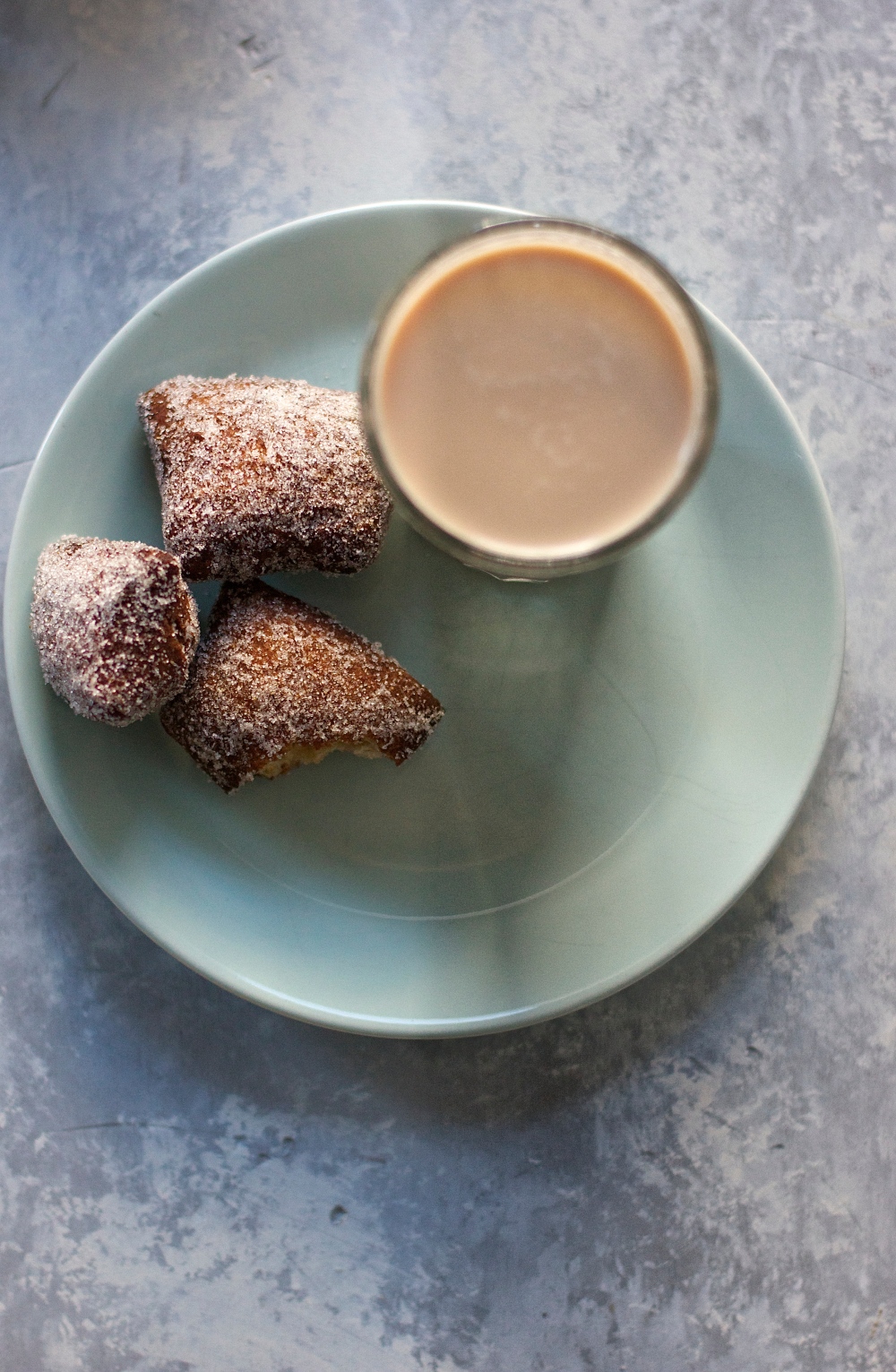 Note: These banana fritters are surprisingly easy to make and could easily be pulled off on  a weekend morning (but maybe not when you are hangover and haven’t had a coffee yet – you shouldn’t really deep-fry things when not fully alert). The one thing to be careful with is the thickness of the fritters – too thick and the fritters won’t cook through before they are starting to brown too much (and you don’t want to lower the oil temperature since the high heat ensures both that the fritters cook properly but also that they do not absorb any unnecessary oil). So try and keep them at max. 0.5cm in thickness, erring on the side of too thin rather than too thick. I would also recommend that you fry 1-2 fritters for testing before frying the rest. That way you can check for doneness and adjust things accordingly.

Whisk together the flour, sugar, baking powder, baking soda and salt in a bowl. Stir in the melted butter, egg and egg yolk, pureed banana and lemon juice. Mix the dry with the wet ingredients until all the flour has been absorbed and you have a soft, but slightly sticky, dough. On a lightly floured work surface gently knead the dough by folding it over itself a few times – you just want to make sure that there are no dry spots left and that the dough has a smooth surface. Don’t worry if the dough seems sticky – that is intentional and ensures that the fritters are not too dry.

Heat the oil to 180 degrees Celsius in a saucepan (making sure it’s at least 5cm deep).

On a lightly floured surface, roll out the dough to 1/2cm in thickness. Cut the dough into 5x5cm squares using a pizzawheel or sharp knife.

Gently lower the squares of dough into the hot oil (but make sure not to crowd the fritters so try not to fry more than 3-4 fritters at a time). Fry the fritters for ca. 60 seconds, turning frequently, or until they are a deep golden brown all over. Place the fritters on a plate lined with kitchenroll to absorb any excess oil. 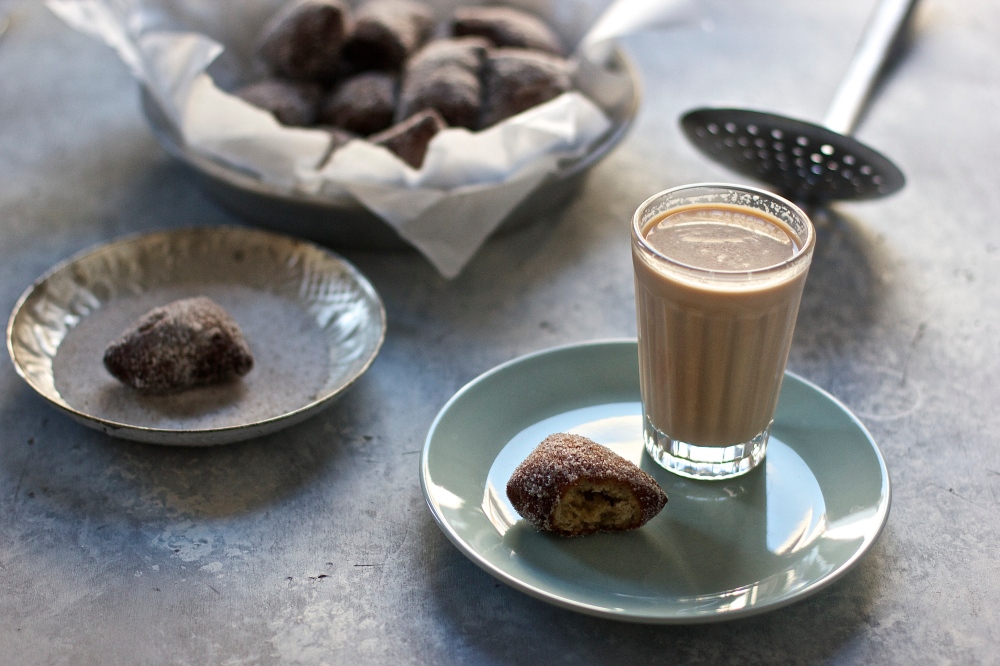