This month marks 10 years since I finished my law degree at LSE (yeah, how did that happen?). While a campus university certainly has its plus points, I loved studying in London. And university itself.  We always used to joke that LSE was ‘the place where geeks could be cool’. And that was certainly true. But like any university it was also simply a place where everyone could start with a blank canvas, reinvent themselves if they wanted to or finally find like-minded individuals and really live out their passions.

For a small group of guys in my year, that passion turned out to be bodybuilding. Day in day out, they would spend hours at the gym, intent on sculpting that perfect body, all while relying on the advice from this guy called Petjo who claimed to be a certified personal trainer (which may in fact have been true). As we all know by now, you cannot out-train a bad diet. So in addition to their obsession with bodybuilding they soon became obsessed with food as well. More specifically, the question of how best to feed their bodies as much lean protein as possible on a student budget. It turns out the answer was old-fashioned German Quark.

I don’t remember exactly how much Quark this group of 5 boys went through, but it was a lot. So much so that the supermarkets closest to LSE’s cramped campus between the Royal Courts of Justice and Lincoln’s Inn Fields frequently ran out. So when the boys were not discussing just how much iron they had pumped during their last session in the gym, they were discussing when which supermarket would have Quark in stock again or whether there had been any sightings of Quark at supermarkets that previously did not stock it.

Quark is a bit of an obscure ingredient for people outside of Germany. If you have not come across it before, Quark is essentially a type of low fat fresh curd cheese (although not to be mistaken for cottage cheese, the two differ widely in texture and flavour!). Quark is made by warming soured milk until the milk starts to curdle, after which the milk is strained. It is similar to fromage blanc in France although it tastes more sour and is not as smooth. In terms of texture it is most similar to ricotta, even if the production processes differ (as ricotta is made from whey).   In Germany, there are many uses for Quark – rye bread topped with Quark and jam is common for breakfast, in summer many people eat a simple dessert of quark mixed with pureed berries and some sugar and there are also recipes for cheesecake made with strained Quark. Quark even features in some home remedies, including to treat sunburn or to bring down a fever.

But the reason I wanted to talk about Quark today has nothing to do with bodybuilding, German breakfasts or home remedies. Rather, I wanted to introduce you to a German quick dough recipe made with Quark that you should add to your baking repertoire for how simple and ingenious it is.

Germans are nothing but straight to the point so this quick dough is simply called ‘Quark Öl Teig’ in German, or Fresh Curd Cheese and Oil Dough.   Enriched with Quark and vegetable oil, the recipe relies on baking powder as leavening agent and bakes up into something akin a simple yeasted dough. The dough is assembled in less than 5 minutes (with none of the sticky mess manhandling yeasted dough can involve) and requires no resting time either. Hence why it is so popular in Germany and is used for anything from jam or fruit-filled and crumbled topped tray bakes to savoury pies and even pizza (just don’t tell the Italians). While the recipe calls for Quark, you can make it with French fromage blanc or labneh/strained yoghurt with equally good results. 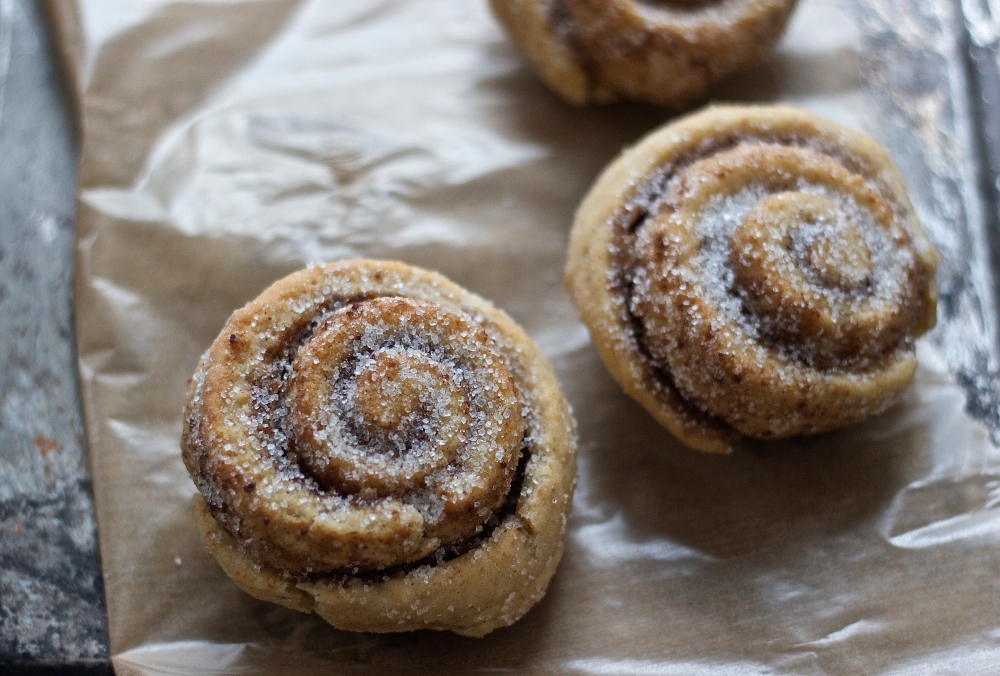 Pre-heat the oven to 180 degrees Celsius and grease a 6 hole medium-sized muffin tray with melted butter (make sure you also grease the top of the muffin tray as the cinnamon rolls will rise and spread in the oven and you don’t want them to stick to your muffin tray).

Stir the dry ingredients into the wet ingredients until all the liquid ingredients have been absorbed and you have ended up with a shaggy mass of dough. Turn the dough out onto a floured surface and fold over itself a few times (the dough will seem soft and a bit fragile, but that is normal) until you end up with a smooth dough.

Roll the dough out into a rectangle a generous 24cm in width and about 5mm in thickness.

In a separate bowl mix together the caster sugar with the brown sugar, cinnamon and salt. Brush the melted butter over the dough, then scatter the cinnamon sugar evenly all over the dough.

Starting with the short edge closest to you, carefully roll up the dough into a tight spiral. Using a knife or a piece of string, cut the dough into 6 equal sized rolls (I like to use a piece of string for this as I always find I end up squashing the rolls when using a knife). Unpeel about an inch of dough from each roll and carefully fold this underneath the roll – this will help to stop the cinnamon sugar filling of the rolls from seeping out into the muffin tray when you bake the cinnamon rolls. Carefully place each cinnamon roll into one of the holes in the muffin tray.

Bake the cinnamon rolls for about 25-30 minutes or until the cinnamon rolls are well risen and light golden in colour. Leave to cool in the tray for about 5 minutes before carefully lifting the cinnamon rolls upside down into a bowl of caster sugar before placing them on a cookie rack to cool completely. While these are best eaten warm, they will keep fresh for a couple of days. 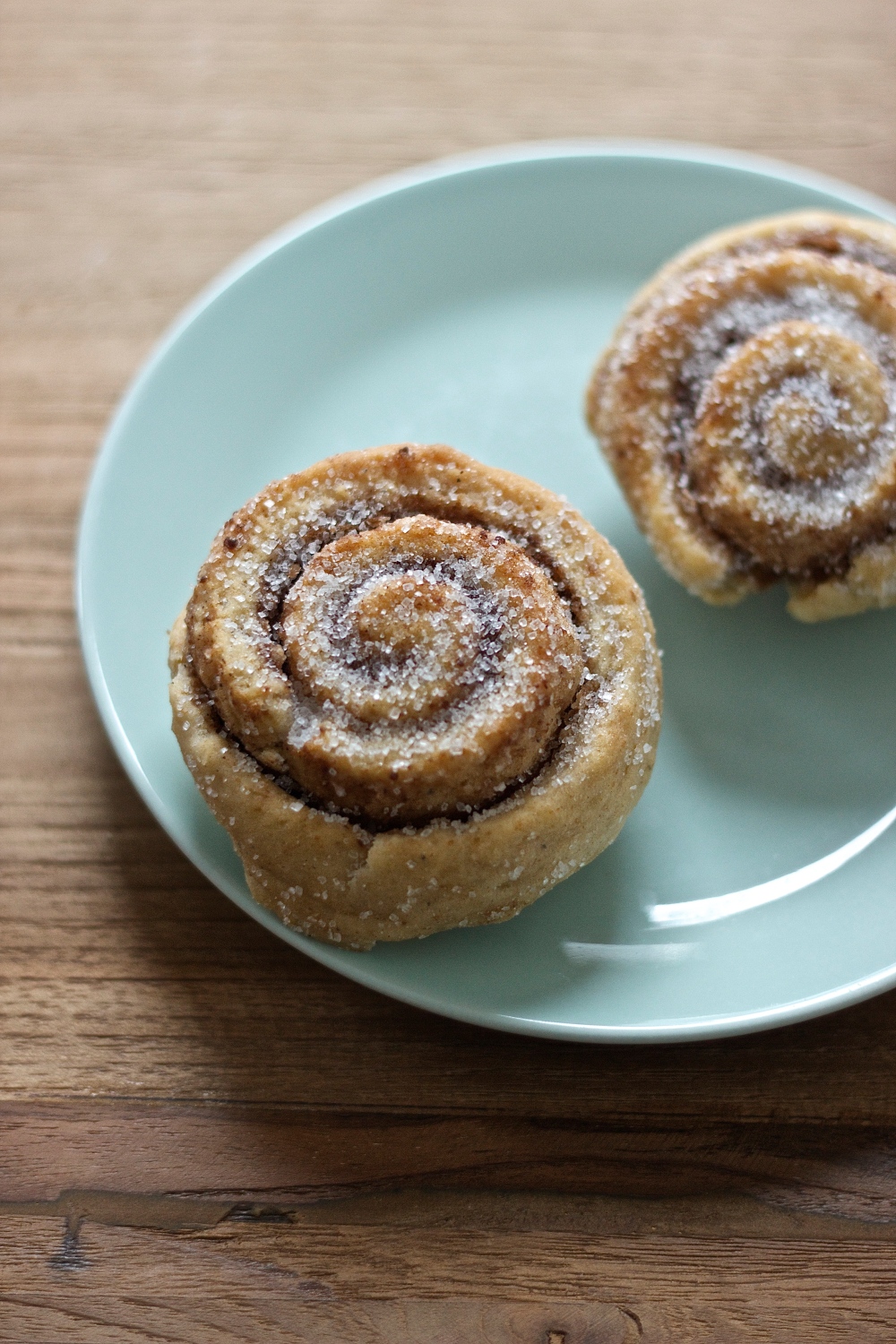